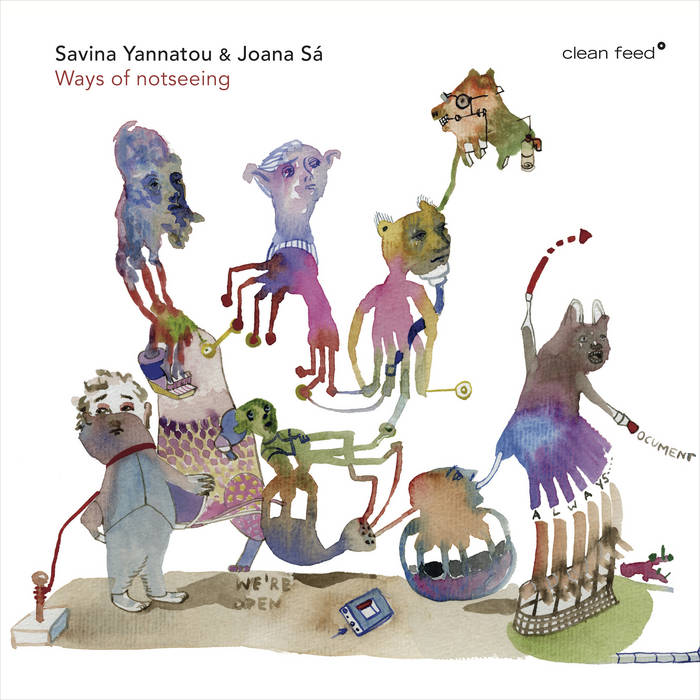 a. In Athens, after a concert at the Big Bang Festival at the Onassis Foundation, I was approached by a mysterious and friendly woman. She introduced herself as a singer and proposed to collaborate with me. I did not know who she was.
She wrote her name and e-mail on a little piece of paper.
b. At the hotel, I checked the name that I had not understood before: Savina Yannatou… was asking me (?!) to play. (on the one hand, I was dying of embarrassment… on the other, I was so happy and excited I could barely sleep).
c. In the following months we wrote each other e-mails, and exchanged CDs &amp; DVDs. I wanted to book a concert venue in Lisbon as a way of starting to work together. Savina decided to come to Lisbon before a concert was even booked.
d. There are once in a lifetime meetings and events that seem beyond explanation. The experience of playing with Savina is one of those: two faraway women come together and, making music, there is a strange feeling of ‘knowing’ each other for ages: before, after, beyond…
e. What is special about these kinds of meetings is not finding a ‘musical something’ that is familiar to you, that you can somehow already recognize and easily integrate in your x –y musical coordinates of rational thought, and playing.
What is special and overwhelming in these rare occasions is sensing an unfamiliar as being intimately close, sensing an unfamiliar as if it had always been part of you. You don’t just discover ‘a strange other’ as most ‘familiar’, you discover your intimate ‘self’ as a stranger to yourself.
f. Ways of notseeing is a collection of quasi-songs, never to be songs, songs that strange themselves in their own process of becoming, songs undone… that paradoxically seem to use different alienating processes of estranging themselves as ways of developing a most intimate and singular sound imagery.
g. Touching John Berger’s Ways of seeing from very far away, this collection of ways of notseeing defies the still prevailing logic of perceiving and deconstructing the world (and even music) mostly through the visual sense, (although acknowledging that sometimes there isn’t a way to escape it completely… and that this should also be okay).
h. Notseeing: the shaping of the resonant space of music inflates through the intensification of other senses, through the activation of out of mind processes and, who knows, the creation of extra-senses, phantom limbs urging in divergent directions - other bodies inside-out our bodies creating, performing music.
i. There is no text, nor script. In Savina’s words:
sounds, non-existing words, melodic lines…
a musical phrase, I don&#39;t know where it leads me
a non-existing language, a narration of a story that nobody can understand, but anybody can imagine their own.
j. A story that, again, does not tell something
(to integrate in one’s own x-y coordinates)
Sharing becomes something itself,
- ondulating thing
empathy as resonance: before, after, beyond…
k. Through this resonant process of touching and being touched at a distance, the sound imagery stretches, shapes and
unshapes new resonant cavities, poetic bulges of voice with a prepared-percuted-bowed-water-piano-non-piano.
l. Playing with Savina, the ultimate sorceress making magic with the real
(sounds, bodies, materiality and immateriality):
the acute assurance of my gesture, detached from my self
but precisely attuned
reminds me that the most difficult
is to acknowledge,
(as resonance before, after,
beyond…)
we all are lost
(a lullaby)